Agate jewellery has been produced in Scotland for hundreds of years, though it was Queen Victoria’s love affair with all things Scottish (culminating in the purchase of Balmoral Castle in Aberdeenshire around the 1850s) which propelled this distinctive type of jewellery to public view. Back in the 19th Century, the aristocracy were a major influence on fashion, and soon people began following the Queen style, which included wearing Scottish jewellery. Popular designs were ‘plaid’ brooches (ie agates laid together in a kind of mosaic), and carved agates set into silver bracelets, complete with carved agate buckles, heart clasps and charms.

Queen Victoria’s death in 1901 signaled a general decline in the popularity of Scottish agate jewellery. However, it became fashionable once again in the 1950s – 1970s when the old Scottish designs were re-created in bold costume jewellery, which used cheaper glass instead of real agates. Famous companies who made this type of jewellery include Miracle, Jacobite and Jem. By the later 20th Century, the beauty of genuine old antique Scottish jewellery was being quietly being rediscovered. Nowadays it is incredible sought after, and antique Scottish agate work can command high prices.

What Is Scottish Agate Jewellery?

The beautiful country of Scotland is home to an amazing array of chalcedony quartz gemstone, also known as agate, which comes in a huge variety of colours and patterns. It was this quality that attracted the skilled craftsmen of the ancient past to experiment with slicing and placing them together to form colourful mosaic patterns. This agate work was then set into metal (usually solid silver, though occasionally solid gold too). The best antique Scottish jewellery often shows different slices of agate which have been slotted, plaided and polished together into patterns to almost form one stone – some jewellery even resembled multi-coloured tartan patterns.
When it came to wearing Scottish agates, it was the brooches which were the most commonly worn as they were both beautiful and functional, holding those heavy Victorian garments, capes and kilts in place. Bracelets, earrings and rings were slightly more unusual. Occasionally Scottish agate necklaces were made, though these are rare and generally only seen in museums or specialist collections. 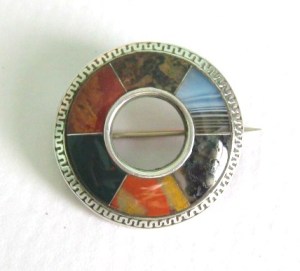 ABOVE: This circa 1870s brooch is a fine example of old Victorian Scottish agate jewellery. Note the flush setting, and high polish finish. Each of these agates came from a different part of Scotland.

ABOVE: A simple Victorian Scottish Agate jewellery ‘slab agate’ brooch, so call named as it is made from only one solid piece of agate. Also, notice the metalwork patterns – Victorians used fine scroll work on their jewellery, not Celtic knotwork patterns.

Jewellery symbolism played an important part of Victorian life. Certain motifs were popular, such as horseshoes, anchors, axes, flowers, thistles, daggers, shields and knots. Buckle motifs were especially loved by the Victorians, and jewellery which displays a buckle piece in its design is still sought after today. Occasionally you’ll see household objects such as kettles, or musical instruments like harps and violins, as canny Victorian jewelers sought to tap into more sentimental designs.

ABOVE: Buckle motifs were popular in the Victorian era. This fine example of Scottish agate jewellery dates from circa 1870s, and the buckle is even movable.

It’s the simple beauty, variety of designs, exquisite workmanship and of course the amazing colours of Scottish jewellery which makes it so desirable. It’s still made today, though in general it tends to be quite different from its ancestors, with greater emphasis on modern metal-work Celtic knot-work patterns rather than creating a mosaic of agate stones. 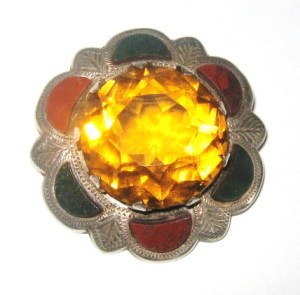 ABOVE: A 20th Century reproduction Scottish jewellery brooch, made with real Scottish agates and a centre citrine quartz gemstone. A quick note – antique and vintage ‘Scottish’ agate jewellery wasn’t always actually made in Scotland. England was a producer too, and the silver work was often assayed in Chester and Birmingham. A lot of genuinely Scottish made jewellery was not assayed at all.

As with most fine antique jewellery, you will come across modern and more affordable takes on this old genre. The skill that was involved in creating the real Victorian Scottish agate work was huge, so nowadays it’s too time consuming to recreate accurately. Therefore modern ‘Scottish–inspired’ jewelry is quite easy to spot with a little practice. Collecting Scottish costume jewellery is a hobby in it’s own right.

The most common indication of a modern reproduction is glass being used instead of agate. This can be difficult to identify at first, because they both are hard, cold materials. However, the modern stones tend to be set into much chunkier metal than agates, and the metal work will often show crude patterns. A good magnifying glass or jewelers loupe is a must – agates often have bits of natural surface wear and some can be slightly matte, while glass is usually ice smooth and more reflective.

Collecting modern Scottish inspired costume jewellery is a popular hobby in itself, but occasionally even second-hand jewellery sellers and antique dealers can’t seem to tell the difference between the modern costume jewellery copies and genuine antique agate work! Always ask sellers friendly questions before you buy if you’re unsure of a piece, and make sure they accept returns if you are unhappy with your purchase.

ABOVE: A modern reproduction Celtic style ring, with purple glass imitation agate. Notice how the metal work is the focus of the jewellery, not the stone. In genuine antique Scottish jewellery it is the other way round – the focus is on the stone work, not the metal.

ABOVE: A modern (circa 1980s) Scottish Celtic bracelet, with glass imitation agates. Compare this bracelet, and the above ring with the Victorian brooches. Notice how the patterns and scroll work are chunkier and more crude in modern items – this helps when trying to date Scottish jewellery.

Buying tips for Scottish all types of jewellery (modern and antique):

~Signatures: Costume jewellery from the 1950s onwards often had company name stamps (aka ‘signatures’) on them. These signatures can be hard to find at first – study the back carefully with a magnifying glass, and if you see words such as ‘Miracle’…’Jem’….’Jewelcraft’….’Hollywood’ you have a mid to late 20th Century Scottish inspired costume jewellery piece. 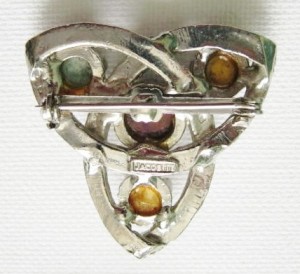 The back of a modern (circa 1970s) glass stone Scottish costume jewellery brooch. It is signed/ stamped ‘Jacobite’, meaning it was made by the company of that name.

~ Condition Condition Condition: In all cases, these should be no stones missing – these are almost impossible to replace. Also avoid cracked and badly chipped stones, unless you are genuinely in love with the piece of jewellery. Tiny nibbles (also called ‘flea bites’) to the stones are generally acceptable in antique jewellery. Check all clasps work, and there is no rust, verdigris or damage to the metal work. 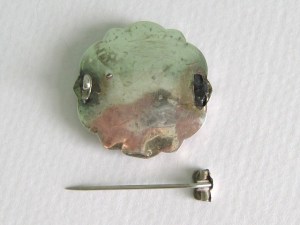 The pin has broken off this old antique Scottish agate brooch – fixing it is very difficult unless your a proper jeweler.

~Does it have a two-tone mix of coral red and green malachite style stones? Watch out – I’ve witnessed some well known antiques dealers fall for this one! You may occasionally come across some Scottish style brooches which at first look to be genuine antiques – usually round brooches, or occasionally 3-leaf clovers or a horseshoe. However they are not old – they are modern mid to late 20th Century reproductions. These brooches are set into solid silver (stamped plain ‘925’), closed at the back (ie full silver backdrops rather than open or slate backed), and have small ‘agate’ tiles of malachite and coral red. But these stones are not agates – they are very good glass copies.

~ Other tips: A good way to identify these modern repros is that they usually have roll over clasps rather than the old ‘c’ style clasp (you can learn more about dating brooches by their clasp type in my Five Tips For Vintage Dating Brooches guide.)

A simple and very occasional light clean in mild soapy water is all you need to do to keep you jewellery clean and bright. Dry immediately and very thoroughly so the water doesn’t affect any cement which may be holding in the agates .